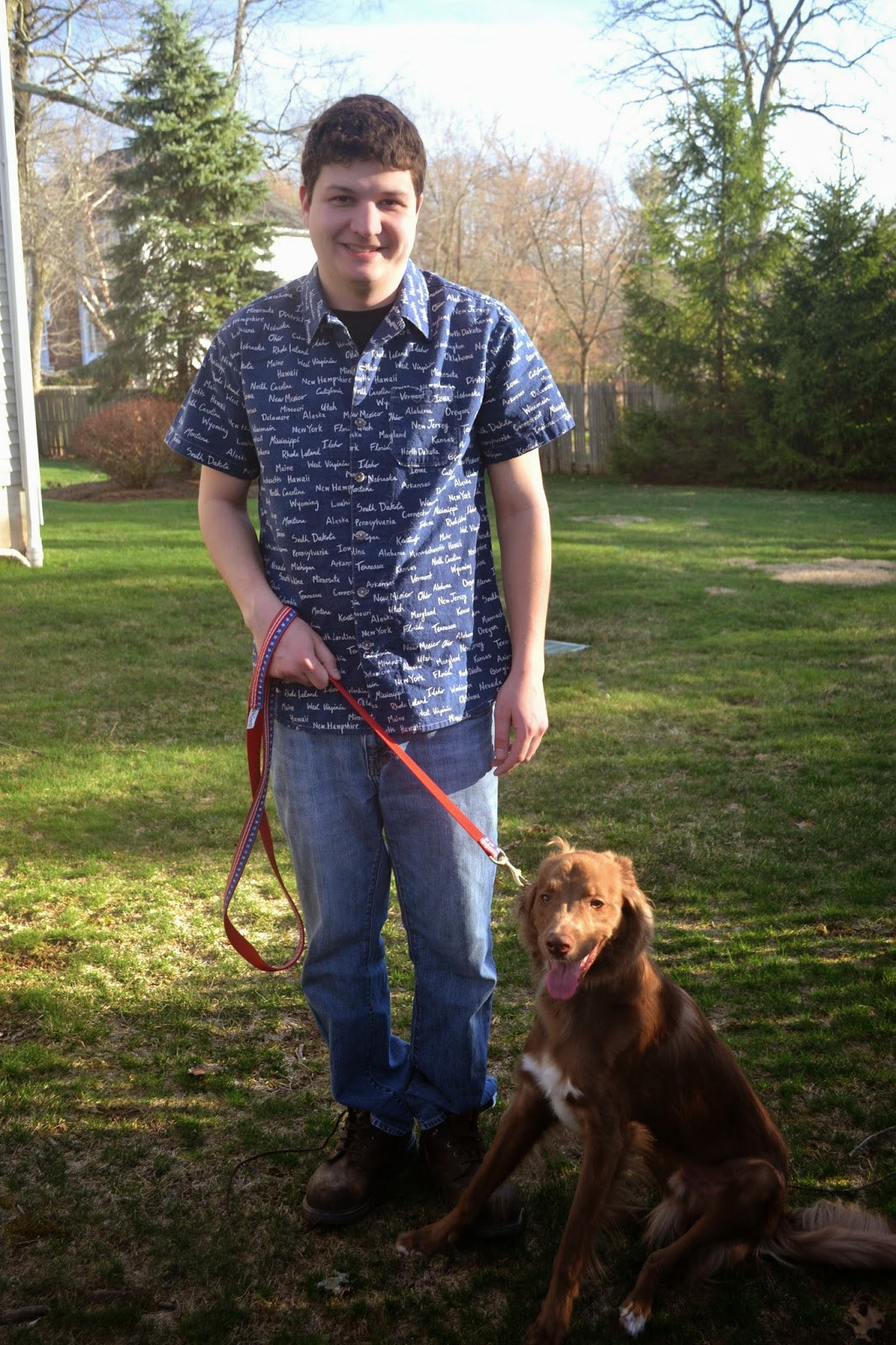 For my brother's birthday I was in the mood to do some selfless sewing.I know shocking, right!  He is always wearing camp style shirts so a Negroni would be the perfect thing. I was hesitant to make a men's shirt because it's easy for it to look a little homemade, but he couldn't believe I really made this shirt, it looked so profesh. Actually this is my first official men's sewing project (pj's don't count). 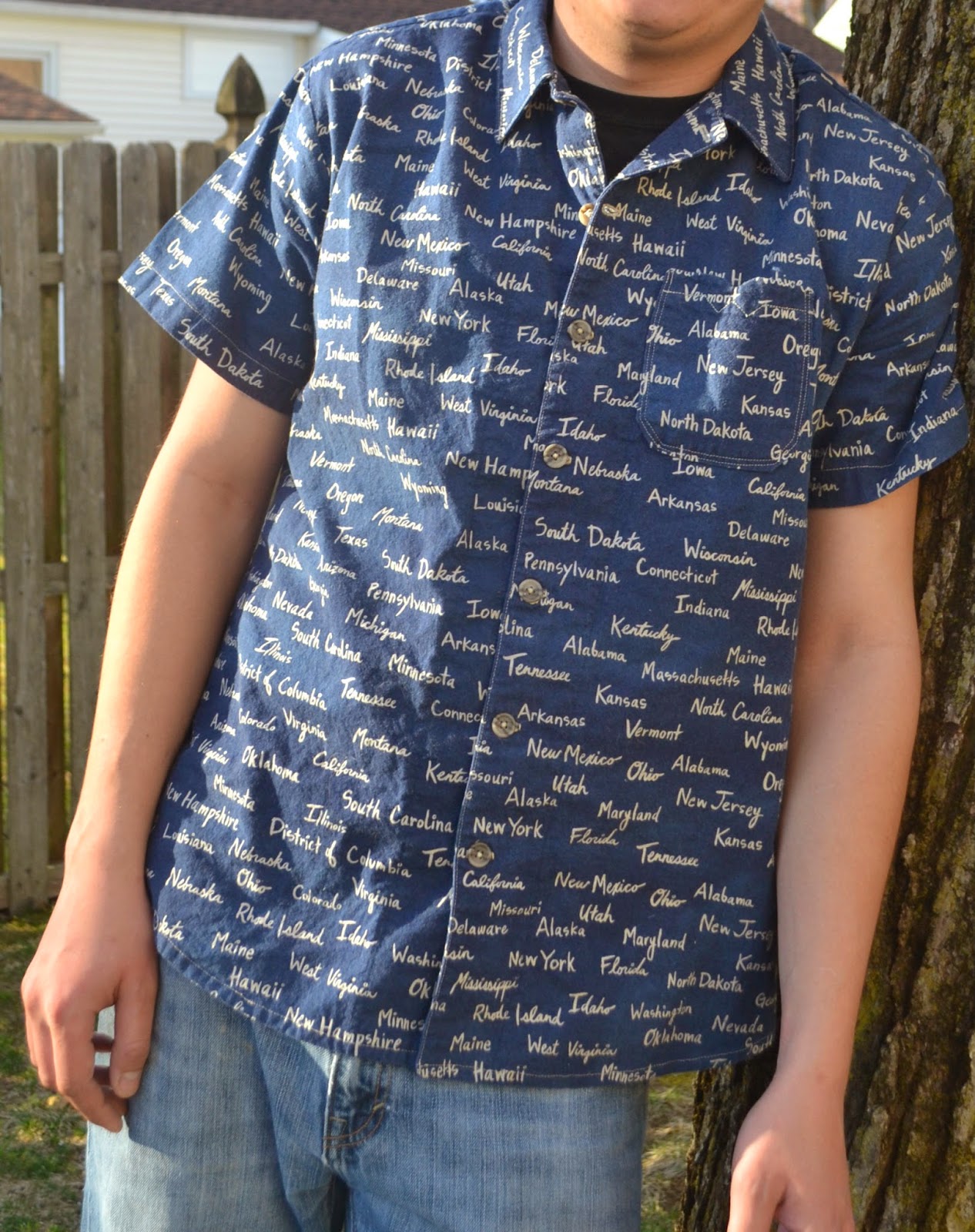 His measurements were in the size L, and I also stole one of his shirts to compare the size too. I wanted it to still have a slim fit on him. I used the shorter size M length, because that was a smidge longer than his RTW shirt. The fabric is a cotton + steel linen/cotton blend home dec weight, with all the names of the US states.  I've been eyeing this fabric at work (Fabricland) for a while, and finally thought of the perfect project. He loves America, and this is a rather subdued print for him, I thought it was safe for my first official mens project.

To give the collar more shape, I pinned it around my pressing ham and steamed it to give it shape. This kept it from laying flat, and looking homemade. I trimmed the undercollar about 1/8", so it won't roll over. I then decided to topstitch everything so that wasn't really necessary. 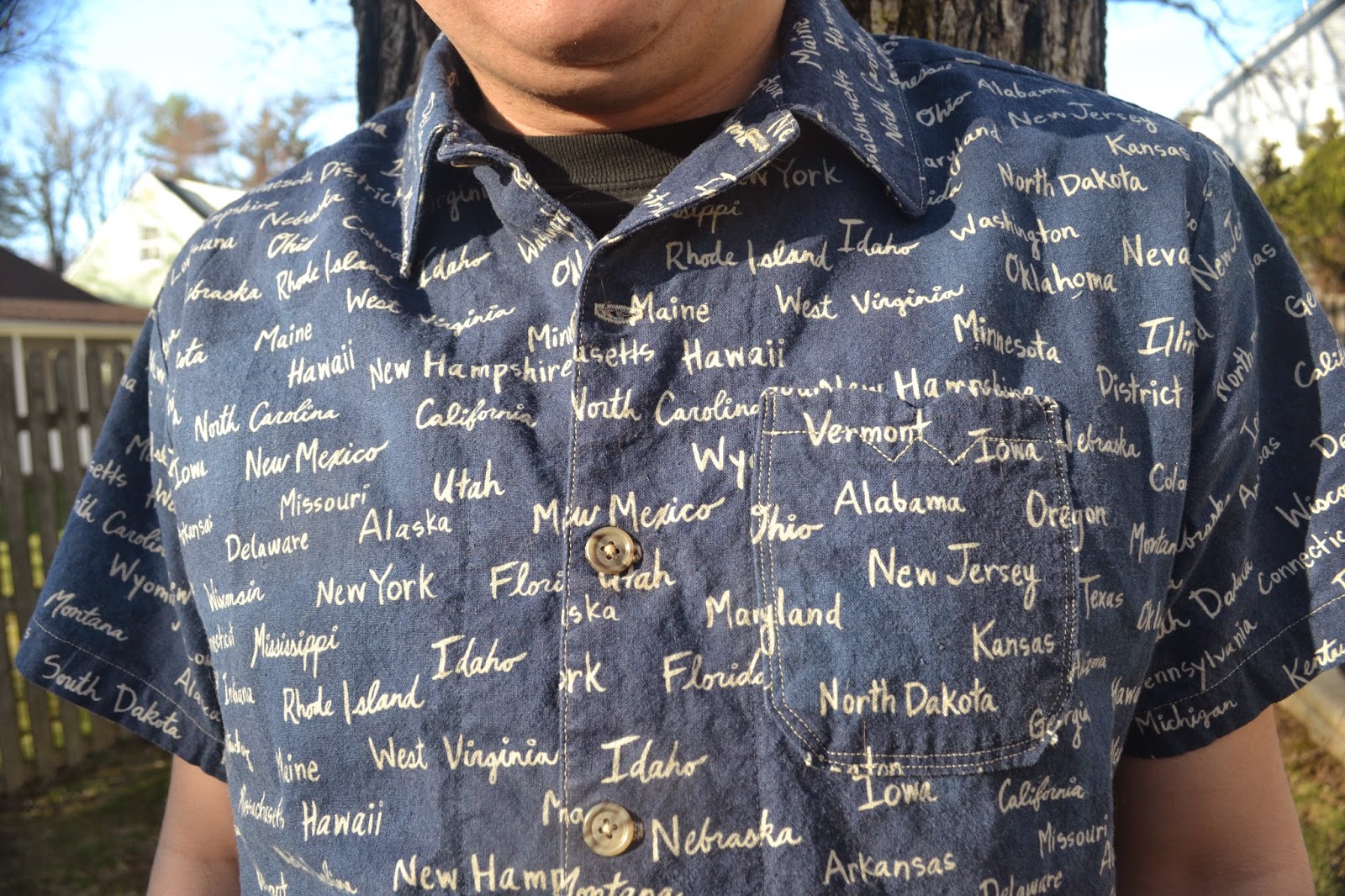 I used the free download of the alternative pocket, which happened to match up perfectly on the sides if you notice :). The facings were very wide, I compared them to his shirt I stole, and took 1.5" off the width. I also sewed the facings down the front, so they wouldn't flap around. I tried to make the shirt as durable as possible, my brother is notorious for being rough with clothes. I just serged the seams inside, instead of doing flat felled seams, I didn't really read the directions and missed that part. OOPS.  I was too lazy to make the button loop for the top and just sewed an extra buttonhole there. I cut the yoke on the cross grain, so the states would go vertical. 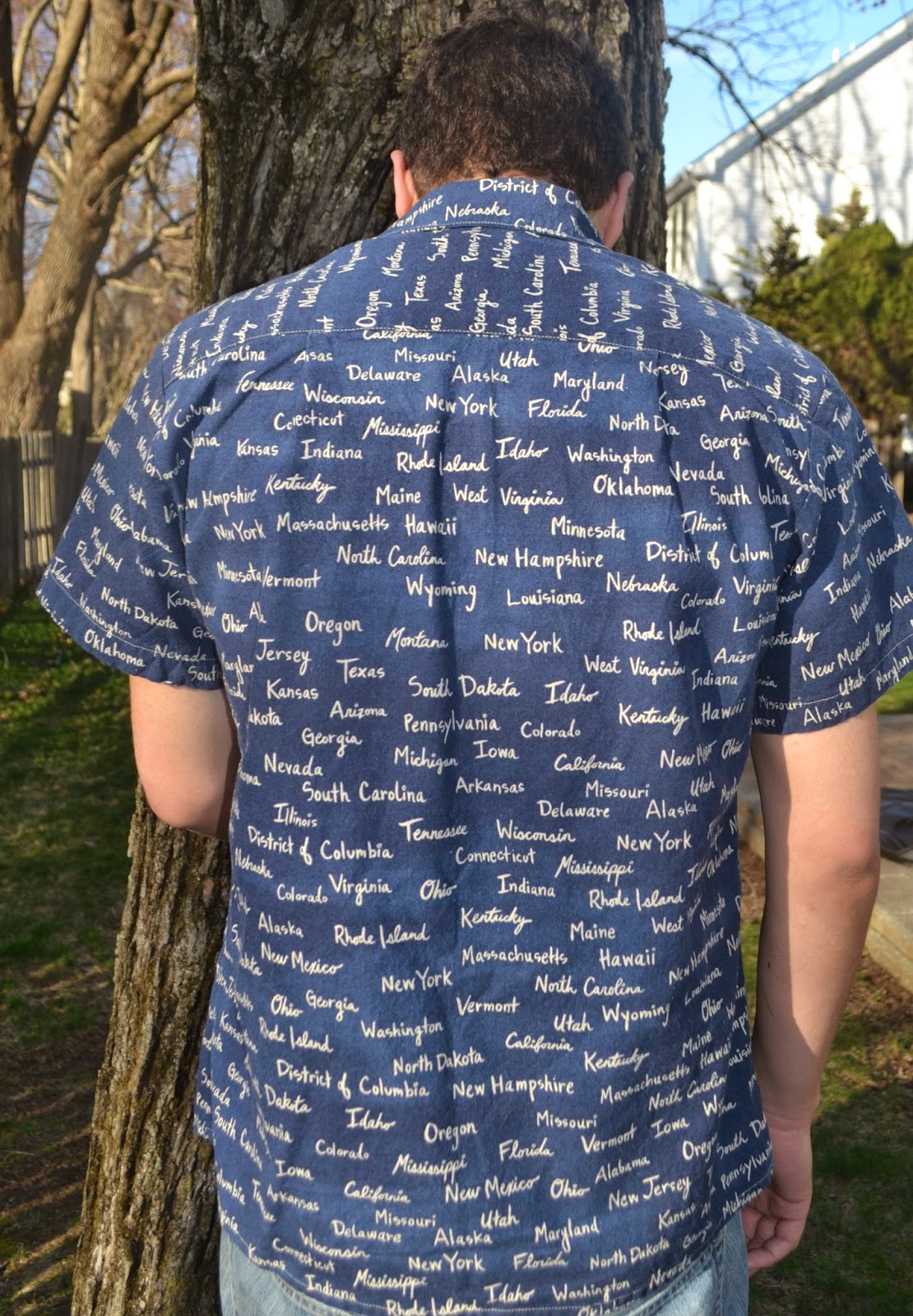 The biggest difference I made was the sleeve length. I cut out, sewed, and hemmed the original short sleeve pattern in, put it on my husband just to see and OMG nerd sleeves! They were about four inches too long.  I cut off the excess and hemmed them to a less nerdy length. 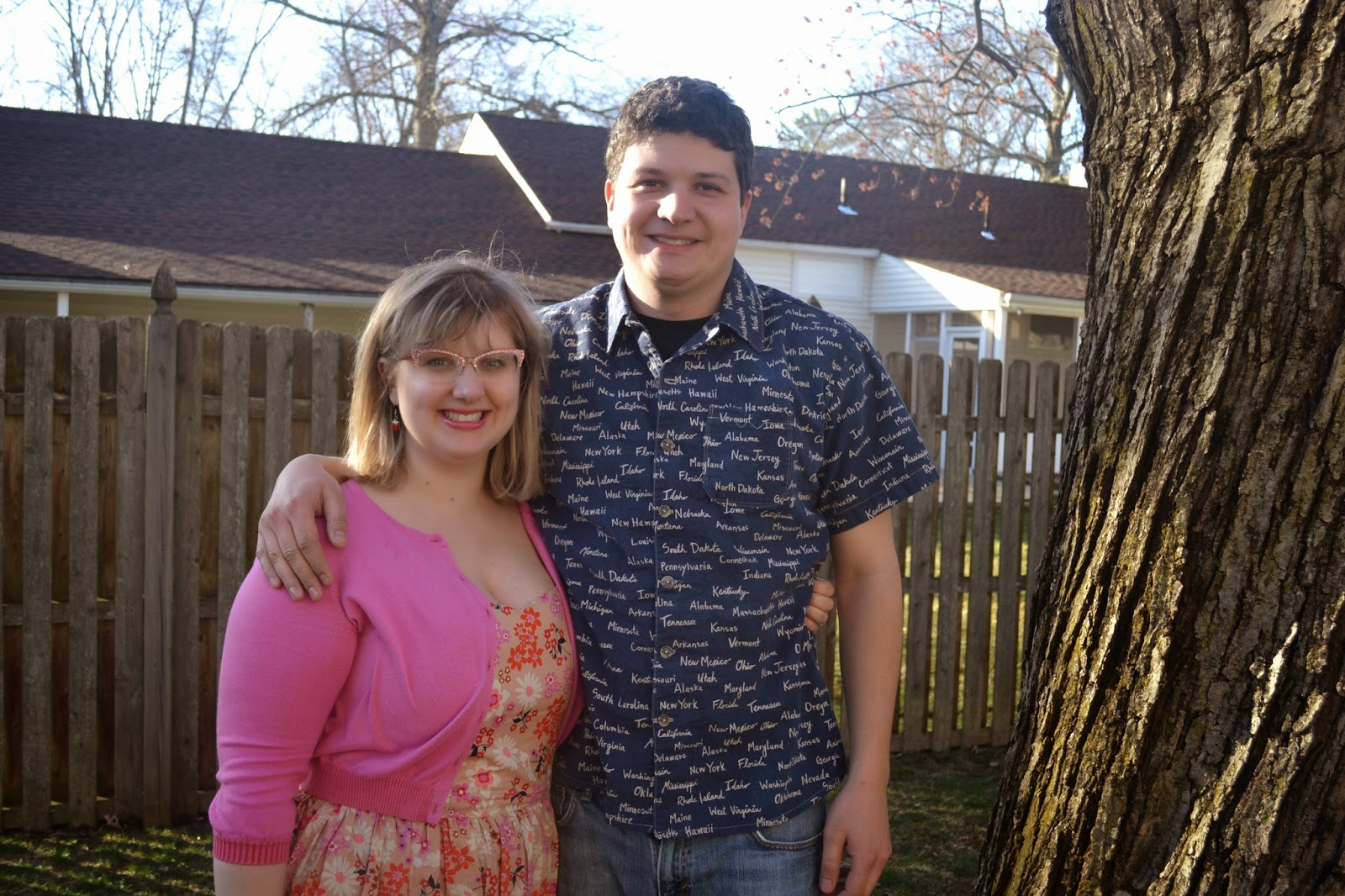 Well he loved it, and I think it fit him pretty well. Here we are looking like a happy cotton + steel family. (I will blog my dress later this week). Happy Birthday Bri! Pin It Now!
Posted by Erika at 9:58 AM